A surge of young voters is fueling a niche market that targets their growing passion.

For nearly three decades, voter turnout among young Americans steadily declined; it seemed that people under 30 just didn’t care about elections or political issues. But the tide started turning in 2004, when voter turnout among 18- to 29-year-olds was higher than any year except 1992.

Current research shows the under-30 generation is paying more attention to politics and elections than ever before–and this politically savvy group isn’t afraid to voice its opinions. Thanks to hot-button issues such as the war in Iraq, global warming and rising gas prices, young voters and activists are not only rocking the vote, they’re rocking the businesses that allow them to display their stance on political issues.

“People have become more passionate and emotional about the outcome of the election, and they want to brand themselves as the type of person who supports ‘XYZ,’ ” says Michal Ann Strahilevitz, a professor of marketing at Golden Gate University in San Francisco. “What you’re seeing is a mixing of freedom of speech with buying stuff; the new trend is to brand yourself as someone who not only supports a side but is really passionate about the issue.”

Eager to express their views, young political activists are flocking in droves to websites like CafePress.com, where independent vendors hawk such political swag as T-shirts, buttons, coffee mugs and even underwear that displays images and slogans supporting candidates and controversial political issues such as the environment, immigration and gay marriage. Sales of election merchandise currently account for nearly 20 percent of overall revenue at CafePress, and hot sellers often mirror voter turnout on certain issues.

Of course, wearing your support on your sleeve–or your chest–for a particular candidate is nothing new. Political swag has been around for more than two centuries, ever since supporters of George Washington donned the first political buttons reading “GW – Long Live the President.”

What is new is consumers’ desire to push their freedom of speech to the extreme with images and statements that some might consider to be in questionable taste. What’s also new is that businesses are stepping up to meet this demand. According to the Promotional Products Association International, political promotional products, part of a $19.4 billion industry, are expected to continue growing to meet consumer demand. 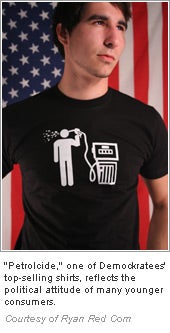 Demockratees, based in Osage Nation Territory in Oklahoma, is one of the new breed of T-shirt stores that’s catering to this new “shock politics” market. One of its top-selling T-shirts is a design called “Petrolcide” in which a stick figure shoots itself in the head with a gas nozzle.

Founder Ryan Red Corn, 29, started making political T-shirts in 2004, and his is one of the few political T-shirt stores that’s managed to survive online. During non-election time, Red Corn says sales average about $6,000 a month. But that number can double or triple if a political news story breaks or his website gets written up in the blogosphere.

So how has he managed to survive while many competitors have gone under? Red Corn credits part of his success to deciding early on to have his shirts manufactured by American Apparel, a clothing company that produces all its garments in the United States. Though the choice increased his production costs by 33 percent, it paid off in the long run.

“That really differentiated us from our competition because they were ranting and raving about political stuff–‘pro America’ this and ‘America’ that–but everyone was printing on non-American-made shirts, which was highly hypocritical to me,” Red Corn says. “A lot of my customers have come back for that reason alone, and have been coming back for the past four years.”

“A lot of other people selling political T-shirts were using text that was dumbed down,” he says. “I really try to shoot for somebody who’s a little more knowledgeable about the issues and their subtle nuances.”

As Red Corn’s learned, today’s younger voters understand the issues and want to prove it through smart political satire.

Pop Culture Pundits
But apparel companies aren’t the only type of business cashing in on the political satire market. Ad-driven sites such as political satire blog Pundit Kitchen are letting users participate in the pundit culture, made popular by such TV shows as The Colbert Report and The Daily Show, by allowing people to be their own political humorist. The site uploads news photos and encourages users to create their own captions, which range from the relatively innocent (a photo of John McCain with a caption that reads “Bush 2.0 – Now with spelling and grammar check”) to the cringe-worthy (a photo of President Bush leaning over a wounded soldier with a caption that reads, “Don’t worry ’bout that leg, son. It’ll grow back.”).

“Our company is very much geared toward pop culture–what’s being talked about, what’s hot and what’s going on in the minds of people that’s entertaining and newsworthy,” says Pundit Kitchen CEO Ben Huh, 30. Since its launch in March 2008, page views of the Seattle-based website have grown to more than 100,000 a day, putting it in the top 1 percent of blogs in the world, according to Huh.

“The site was created as a way for people who are interested in politics but aren’t ‘political junkies’ to weigh in and express themselves in a creative and humorous way,” Huh says.”

A weekly ad on Pundit Kitchen sells for $50 to $300, depending on placement. It’s a modest income compared to other political blogs such as TalkingPointsMemo.com, which BusinessWeek estimates makes $45,000 a month in ad revenue. But despite its status as the new kid on the block, Pundit Kitchen is proving itself in a new niche market of political blogs that deliver satire and humor over news and analysis, and so far people are eating it up.

Whether it’s through conventional humor or in-your-face imagery, young, political-savvy consumers want the world to know where they stand on candidates and issues, and they’re seeking businesses that allow them to express those views. And with the presidential election still months away, there’s still time to jump into this niche and meet an ever-growing consumer demand.