Saturday’s brilliant demonstration around the “Sky Walk” at Patumwan junction in Bangkok marked what could be a new beginning for the Thai democracy movement. Over three thousand people assembled to protests against Thai dictator Generalissimo Prayut Chan-Ocha, who heads a parliamentary dictatorship. Another modest protest took place in the northern city of Chiang Mai. These protests are the first protests to occur since the election.

Prayut staged a military coup against the elected government of Yingluk Shinawat in 2014. A military junta then ruled Thailand until so-called elections were eventually held in early 2019. These elections were highly flawed, with military appointees in the Election Commission, Constitutional Court and the unelected Senate, ensuring that the unelected General Prayut became Prime Minister, despite the fact that his party won less votes and parliamentary seats than the opposition.

Before the election, the Constitutional Court dissolved one opposition party under the excuse that it had put forward a member of the royal family as its candidate for Prime Minister.

After the election, the military appointed courts disqualified Thanathorn Juangroongruangkit, leader of the Future Forward Party, from being a member of parliament. The excuse was an unsubstantiated accusation that he owned shares in a media company. Thanathorn denied this and explained that he had got rid of the shares before the election.

Now the parliamentary dictatorship is trying to disband the entire Future Forward Party under the ridiculous excuse that the party borrowed funds from Thanathorn. Most legal experts are of the opinion that this does not break the law.

This latest threat to the most assertive anti-military party in parliament was the last straw for Thanathorn. He made a public call for what he called a “flash mob” to come together on Saturday 14th December. He then addressed thousands of protesters, who were chanting anti-dictatorship slogans, saying that future protests would be called.

Previously the Future Forward Party leadership had been very cautious, sticking to the political rules for the election which were drafted by the junta. They specifically rejected any campaign against the draconian lèse majesté law which has been used to imprison those critical of the military and the monarchy. This law, together with the “Computer Crimes Law” is the junta’s weapon against free speech. Recently the junta have been using the “Computer Crimes Law” instead of the lèse majesté law in an attempt to improve its image. However, the result is the same: a denial of free speech.

The Thai monarchy has long been used as a political tool by the military. The military always claims to be protecting the monarchy like a holy deity. Any criticism of the military is deemed to be also against the monarchy. The monarchy has little power in itself, and this is even more the case with the new king, who cares little about politics and society and chooses to live a debauched life in Germany.

The “Future Forward Party” has a clear policy of reducing the power and influence of the military by scrapping the military constitution and other junta inspired laws. It is also opposed to conscription. It has been busy pushing its “new look” and claim to be the party of the new generation. However, it is a party aimed at sections of the pro-democracy middle classes. It prioritises the free-market and business interests while also claiming to support the poor in an abstract manner. Its leader, tycoon Thanathorn Juangroongruangkit, stated that it aims to “protect capitalism for the benefit of the majority”. In the past he emphasised that business must make a profit before benefits for workers can be improved. It is in favour of devolving power to the provinces and has made progressive sounds about self-determination in Muslim-Malay dominated Patani.

The other main opposition party in parliament is the Taksin Shinawat controlled Pua Thai Party. It has a long pedigree of being supported by the rural poor and urban workers. But it is a party of big business. Taksin’s first party, Thai Rak Thai, brought in the first ever universal health care scheme and other pro-poor policies. Four Taksin-dominated elected governments were overthrown, either by the military or the pro-military judiciary in a number of coups beginning in 2006. These coups helped to create the political crisis and the sharp divisions in Thai society which remain today. The military and the conservative elites and middle classes hated the Taksin governments because they started to redistribute wealth to workers and farmers in order to build a modernised society which would benefit big business. They resented the fact that the majority of citizens supported these parties in elections and they have been continuously trying to use various undemocratic methods to make sure that the conservatives can hold power after elections.

A decade ago, supporters of Taksin Shinawat and his political allies built a huge pro-democracy mass movement called the Red Shirts. The military responded by shooting down unarmed protesters in the streets. Yet this did not destroy the movement. However, by 2014 Taksin and his political allies had successfully demobilised the Red Shirts, hoping to do a deal with the conservatives.

Since then, many people have turned their backs on the idea of building mass social movements, claiming that it cannot be done and would result in a blood-bath. The recent protest called by Thanathorn disproves this.

Until recently the Future Forward Party had rejected the idea of building a mass movement on the streets. Yet, Thai and international History shows us that mass social movements are vital to bringing down dictatorships. 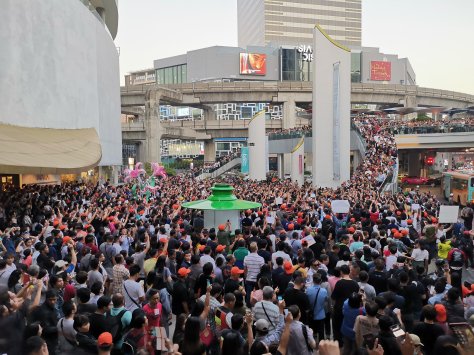 The change of heart in the Future Forward Party and the call for more protests against the parliamentary dictatorship is to be welcomed. But pro-democracy activists cannot just rely on people like Thanathorn to build the necessary movement to overthrow the military. Independent activists, not allied to main stream political parties, especially those among the trade unions and among students, need to step forward and help build the movement.