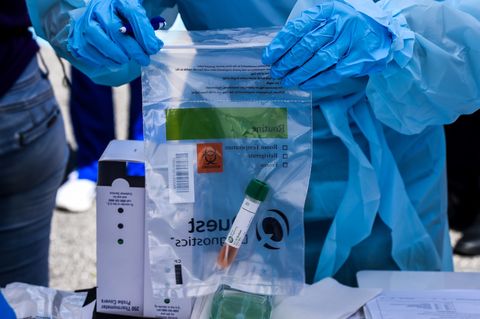 The most consequential—and logically inexplicable—decision taken by this administration* in response to the current pandemic occurred in January, when German scientists developed the first test for COVID-19 and the World Health Organization offered the test to countries around the world and 60 countries accepted. We were not one of them. From Politico:

Why the United States declined to use the WHO test, even temporarily as a bridge until the Centers for Disease Control and Prevention could produce its own test, remains a perplexing question and the key to the Trump administration’s failure to provide enough tests to identify the coronavirus infections before they could be passed on, according to POLITICO interviews with dozens of viral-disease experts, former officials and some officials within the administration’s health agencies.

The slowness of the testing regimen — which, administration officials acknowledged this week, is still not producing enough tests to meet the national demand — was the first, and most sweeping, of many failures. So far there have been confirmed cases in at least 23 states, and at least 15 deaths, while the stock market plunged and an otherwise healthy economy braced for a major disruption.

Let’s guess why this happened, and let’s leave aside for the moment that Jared Kushner’s brother runs a company that’s involved in testing, because that should not be any kind of surprise. What I’m fairly convinced is also behind that decision is the administration*’s disdain for international organizations, alliances of any kind, and foreigners in general. Couple that with the Republican Party’s similar xenophobic impulses and overall dislike of any science that can’t be replicated with baking soda and Fizzies, and you’ve got a pretty good reason why help from overseas is more terrifying in many minds than viruses from overseas are. American exceptionalism now means “except us.” That’s not a good development.

Charles P. Pierce
Charles P Pierce is the author of four books, most recently Idiot America, and has been a working journalist since 1976.