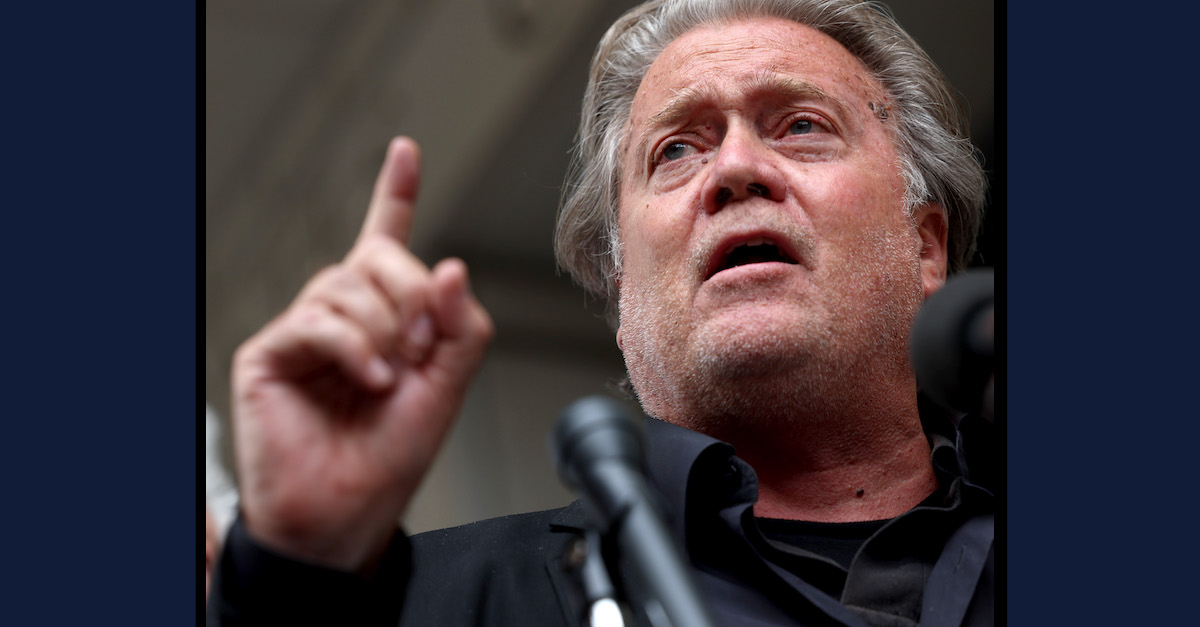 Former White House Chief Strategist Steve Bannon speaks to reporters as he leaves the Federal District Court House at the end of the fourth day of his trial for contempt of Congress on July 21, 2022 in Washington, D.C. (Photo by Anna Moneymaker/Getty Images.)

Prosecutors pointed a federal judge on Thursday to Steve Bannon’s own podcast and Gettr posts in response to Bannon’s complaints that publicity generated by the Jan. 6th Committee made a fair trial difficult or impossible.

As Law&Crime previously reported, Bannon argued on July 22, 2022 that the previous day’s Jan. 6 Committee proceedings “included a feature segment” that was of a “particularly inflammatory nature.”

“The nature and substance of the segment present a significant cause for concern regarding possible prejudice to Mr. Bannon’s constitutional fair trial rights and right to a jury trial if a juror viewed the segment of was made aware of it in some manner,” wrote Bannon attorneys Evan Corcoran and David I. Schoen.

Bannon’s jury trial began on July 18 and concluded on July 22, the day after the Committee hearing in question and the same day as the aforementioned complaint.  A jury convicted Bannon of contempt of congress for ignoring subpoenas to testify and to provide documents to the Committee.

“The Defendant did not . . . include in his notice any of the publicity about the Committee, the Defendant, or the trial proceedings that the Defendant himself generated in the lead up to or during trial,” Vaughn wrote. “Accordingly, the Government files this response to the Defendant’s notice to add to the record the Defendant’s own efforts to publicize the CNN program about which the Defendant has raised claims of prejudice [citation omitted] and to garner coverage of the Committee’s work and his trial.”

What followed was a laundry list of Bannon podcasts which the government said needed to be included in the record.

For instance, on July 12, Bannon discussed with his own podcast audience “his eleventh-hour offer to testify before the Committee,” Vaughn wrote.

“He also stated that listeners should pray for ‘our enemies’ because ‘we’re going medieval on these people, we’re going to savage our enemies,”” Vaughn added.

Bannon moved on July 15 to continue his trial “because of a CNN program” scheduled for broadcast on July 17, prosecutors recalled.  However, after balking at the broadcast, “an advertisement for the CNN program was posted to the Gettr page of the Defendant’s podcast, the War Room,” they noted. Another “advertisement” for the CNN show was “reposted” to a Bannon-linked account again the same day, according to the filing.

Prosecutors appeared to suggest that Bannon could not have it both ways: He could not simultaneously complain about a program and then draw attention to it via his own channels.

Vaughn also pointed a judge to Bannon’s own courthouse press conferences on July 18 (in which the defendant called the Committee hearings a “show trial”), July 19 (where he referred to a member of Congress “by derogatory names” and said the Committee was not investigating “in good faith”), and July 20 (where he called the Jan. 6th Committee “the Moscow show trial of the 1930s”).  On July 21, prosecutors said Bannon and his attorney gave another press conference; in it, the “attorney commented on his advice-of-counsel and executive privilege claims” — in other words, the defense strategy — “and the Defendant discussed purported details about his prior compliance with congressional subpoenas,” Vaughn noted.

Though the trial is complete, and though Bannon has been convicted, Nichols has not ruled on Bannon’s pre-conviction July 22 motion about trial publicity.

Bannon’s lawyers noted on July 22 that Nichols previously warned the jury not to watch or read coverage or commentary pertaining to the trial.  However, they suggested the court should inquire further as to whether the jurors watched the Jan. 6 Committee hearing of July 21.

Nichols on July 27 rubbished one of two key defense motions.  The first sought to dismiss the case; the second moved for a judgment of acquittal.

“The Court concludes that the evidence presented in the government’s case was sufficient to sustain a conviction,” Nichols wrote while denying the motion for a judgment of acquittal.  “The only reason the Court did not make this ruling on the record at the time the Motion was made orally was the Court’s concern about the risk of potential jury bias.”

However, Nichols ordered additional briefs to be submitted on whether or not the case should be dismissed regardless of the verdict.  Those briefs are due on or before Aug. 5 for the defense and Aug. 12 for the prosecution. An additional reply, if one is desired, is due Aug. 19.  Thus, the issue of whether the case could technically be jettisoned in Bannon’s favor remains outstanding.

Both the defense motion (docket 127) and the prosecution response regarding trial publicity (docket 138) below: