Skip to content
Okay, so Ladra’s been busy and begs for scraps of forgiveness from
the political junkies that need her particularly sarcastic java. But I’m
baaack. This is being republished from my new website location, www.politicalcotadito.com. Please bookmark or flag the page so you can go there because, eventually, I will stop repeating myself. Verbatim, anyway.

But this new venue allows me to start tracking a new scent. Or several
ominous odors, as it were. Despite the barrage of distractions, both
random and deliberate (more on that later), there has still been
information trickling in through gaps in the noise. And I’ve still been
listening to the clues that connect the dots. In the coming days, Ladra
plans to bark about the county mayoral’s race, Miami Lakes, Doral,
casino gambling, the school board, redistricting, residency requirements
— she said, as state reps and school board members (you know who you
are) collectively choked on their coffee — campaign ethics and, of
course, (though it feels weird to write it in the same breath as
campaign ethics) Hialeah. But Ladra does plan to walk different parts of
town — maybe even Coral Gables and North Miami (yes, yes, I am
listening to you people).

And what timing, eh? There could not be a
better day to come back and play in my new dog park, what with the
backdrop of the Republican presidential primary and county reform vote
(even though at least 90.000 voters have already cast early and absentee
ballots, 24,421 and 69,000+ as of Monday evening).

Ladra is
mostly a local political K9, but this primary has 305 written all over
it. And while we don’t like to make predictions — especially in races
where we are woefully underinformed —  if the vote is any reflection of
the number of electeds and local professional pols falling all over
themselves for a photo op with Mitt Romney, well, he looks like he’s won already. While U.S. Rep. David Rivera‘s heart reportedly belongs to Newt, Romney’s long list of local endorsements includes not only the Diaz-Balart Dynasty and Ileana Ros-Lehtinen –who apparently showed him (que pena!) how to slice lechon caja china
at the infamous Casa Marin restaurant (where they also count absentee
ballots in the kitchen, I hear) — but also local notable favorites of
Ladra’s like Miami Lakes Mayor Michael ‘Muscles” Pizzi and the Hialeah City Council.

Oops, I mean the council minus Vivian Casals-Muñoz — again. Well, her and that other woman. What’s her name again? The clueless baglady who rode the AB machine and miraculously beat Professor Alex Morales
in the November election? Well, whoever. Her absence doesn’t raise
eyebrows like the “what the…” that results from the glaring lack of
participation from Casals-Muñoz alongside those who she has served with
for years — Mayor (and former Councilman) Carlos Hernandez and Council Members Isis Garcia Martinez, Katherine Cue, Paul Hernandez and Jose Caragol.
Casals-Munoz, the only incumbent not on the Hernandez slate this past
November, has not been in any of the photos I saw from the Casa Marin
event or other Hialeah rallies. She was also not invited (intentionally,
it is implied) when Romney visited the nearby Conchita Foods warehouse
way back in November and missed those photo ops. There is a definite
cooling off between old cohorts at City Hall. Though the councilwoman —
who I keep playing phone tag with — shrugs her shoulders and makes
nothing of it, friends of hers says she is beginning to feel the chill. 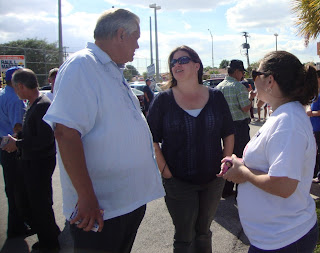 Not sure, Vivi, but maybe it has something to do with the whispers that you just might give su alcaldito a run for his money and his seat next year. ust sayin’. That challenge
— however small a consideration in the back of your mind that it may
still be — would not just be so much fun to watch, but political
genius. And you’re a shoo-in if you keep this new, happy, productive
‘tude up and shedding those pounds.

And if you shake that that tiny little bit of stink still left on you by former Mayor Julio Robaina,
who I hear will not run for county mayor (more on that later), and your
notary public position at the 1st Hialeah Bank of Julito, well, heck,
you might be the next Hialeah homegirl to go all the way — to County
Hall.

Speaking of friends and old political allies, Casals-Muñoz had two close ones on the Romney endorsement list: State Reps. Eddy Gonzalez and Jose Oliva,
who lent considerable support to her re-election campaign. But another
notable no-show on the “Rah rah for Romney” roster is State Senator Rene Garcia, another one of the councilwoman’s pals, who is up for re-election and could face a challenge, dicen las malas lenguas,
from Robaina, who knows he can only win political office again in
Hialeah. Or at least would likely try his rebound from the relative
safety of his power base.

Yes, I’m back. Because it is going to be a fun year.