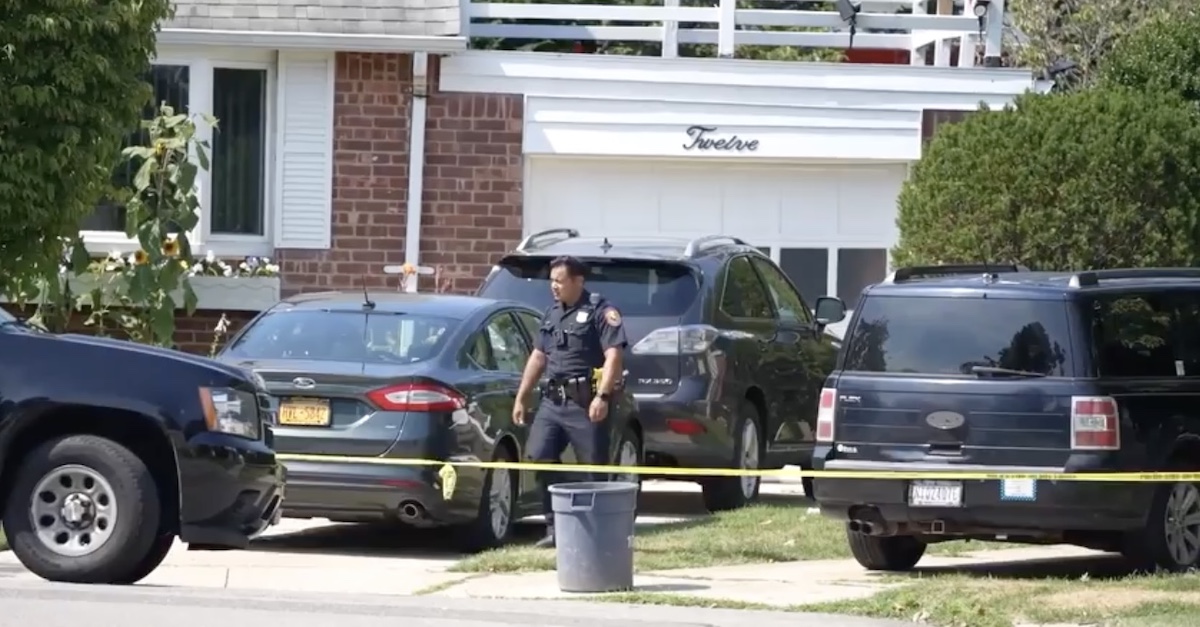 Police in front of the home where Marina Gabunia Verriest was reportedly mauled to death by her late stepson’s pit bull (via NY Post screenshot).

A 70-year-old woman in New York was killed this week when the pit bull she was looking after reportedly mauled her to death in her own backyard. The 7-year-old canine had apparently belonged to the victim’s stepson, who died last week after a motorcycle accident.

An officer in the Nassau County Police Department’s Public Information Office would not confirm the identity of the victim to Law&Crime, but multiple outlets have reported that her name was Marina Gabunia Verriest.

According to a report from NBC New York, officers at approximately 1 p.m. on July 27 responded to a 911 call about a dog attack at a home located on Terrace Court in Albertson. The caller said he left the house that morning and returned home to find the dog dragging his wife’s mangled body through the backyard.

According to a report from the New York Post, the husband told police that he did not know when the animal attacked his wife, but stated that when he first came upon the scene “the dog was still eating on the body.”

Upon arriving at the scene, first responders located the dog and the woman’s body in the backyard. When an officer attempted to approach the scene, the animal reportedly charged resulting in the officer fatally shooting the dog. The department reportedly said that the officer who shot the canine had to be taken to the hospital because he was traumatized by the carnage he observed in the yard.

Emergency Medical Services (EMS) personnel who responded to the home declared Verriest dead on the scene.

“The scene was pretty horrific. We don’t know what time the attack took place but there was obviously a lot of mutilation on the body and the arm, the face, the legs,” Nassau County Police Commissioner Patrick Ryder said at a press conference, according to the Post. “The officer saw something that was very traumatic, we take care of our officers and make sure they’re OK.”

Investigators don’t suspect foul play was involved in the attack on Verriest, but they also don’t know how or why the dog suddenly attacked a familiar human. Verriest’s stepson reportedly lived at the residence until his untimely death. Making matters even more confounding, the dog had reportedly lived in the family home for its entire life.

“We don’t know what turned the dog or why the dog turned on the woman,” Commissioner Ryder reportedly said. “There had been no previous domestic calls to the home or calls regarding the dog.”