When the Founding Fathers wrote the Constitution, they wanted to make sure that their new government would not have any of the problems that the colonial British government did.[1] For example, they did not want there to be any person in the government who had complete power and could do whatever he wanted, like a king. They also did not want any part of the government to get so powerful that nobody could control it. Because of this, they split the government’s power into three different branches. Each branch has ways of balancing out the power of another branch if it gets too powerful. This is called the system of checks and balances.[1]

The north side of the White House, home and work place of the U.S. president

The President may also make “executive orders” to make sure that people follow the law.[2] One famous executive order was President Abraham Lincoln’s Emancipation Proclamation.[3] Another was President Dwight D. Eisenhower’s order to send 1,200 soldiers from the 101st Airborne Division to allow the Little Rock Nine into a school that refused to admit African American students.[4]

The President is in charge of many departments that control much of the day-to-day business of government. For example, the Department of Commerce makes rules about trade and business. The President chooses the heads of these departments, and also nominates judges at the federal (nation-wide) level.[2] However, the United States Senate, part of the legislative branch, must agree with all of the people the President chooses. This is another check on the President’s power, so he cannot just fill these departments and courts with people that will always agree with him.[1]

The President may serve two 4-year terms, making 8 years in all. The purpose of this rule is to prevent a person from staying President for his whole life, like a king.[2]

The Judiciary branch is made up of federal courts: the United States Supreme Court; appellate (appeals) courts, and district courts. The Judicial branch interprets the laws. This means that if there is a question about what a law means, or whether something is illegal, these courts decide.[5] 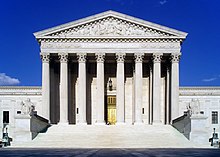 The duties of the judicial branch include:[5][1]

Most cases brought before the Supreme Court are appeals that have been tried in the district or appellate courts. Once a decision has been made by the Supreme Court, that is the final decision. Only another Supreme Court decision, in another case, can change it.[5] 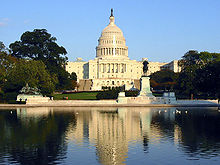 The other house is the United States Senate. In the Senate, each state is represented equally, by two Senators. Because there are 50 states, there are 100 senators. Before the President makes treaties or hires officials, the Senate must approve them.[6]

Each state also has its own state Senate. Like with the House, this should not be confused with the United States Senate, which deals with federal issues.[7]

How laws are made[change | change source]

Representatives and Senators suggest laws, called “bills”, in their separate houses. A bill may be voted upon by the entire house right away, or may first go to a small group of members of that house, known as a committee, which may recommend a bill for a vote by the whole house. If one house votes to pass a bill, the bill then gets sent to the other house. if both houses vote for it, it is then sent to the President. The President may sign the bill, ignore it, or veto it. If the President signs or ignores the bill, it becomes a federal law. If the President vetoes the bill, it is sent back to Congress. If Congress votes again and at least two-thirds of Congress votes for the bill, it becomes law. The President cannot veto it again. This is another check on the President’s power.[6][1]

Under the American system of federalism, Congress may not make laws that directly control the states. Instead, Congress may use the promise of federal funds or special situations, such as national emergencies, to encourage the states to follow federal law. This system is both complex and unique.[6][1]

The whole federal government is based on: