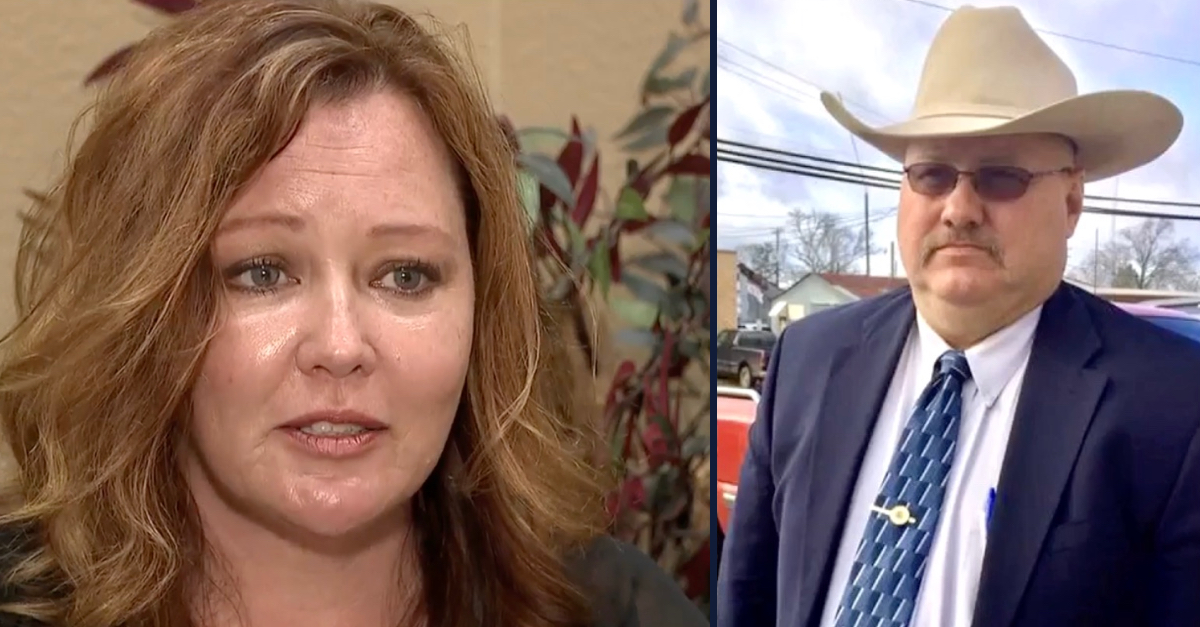 A federal appeals court has sent a case back down to a lower court after deciding that a local sheriff’s deputy in Texas who allegedly forced a woman to expose her genitals to him while he masturbated isn’t entitled to a qualified immunity defense.

On Thursday, a three-judge panel on the U.S. Court of Appeals for the Fifth Circuit ruled that David W. Boyd had likely violated the civil rights of Melissa Tyson during what was supposed to be a welfare check, and therefore he can’t claim qualified immunity, as a lower court had previously ruled.

On Sept. 18, 2018, Tyson’s husband had called the Sheriff’s Department of Sabine County, Texas, to request a welfare check on his wife. According to court documents, Tyson was at home “alone and distressed” while Wade Tyson was out of town.

Boyd called Melissa Tyson that night, introducing himself as a sheriff and telling her he would stop by the next morning. At the time, he told Tyson that he handled welfare checks because he was a preacher, although as the Fifth Circuit ruling notes, Boyd’s “ministerial credentials had actually been revoked eleven years prior because of prohibited sexual conduct.” As a minister, Boyd had also been sued by church members for alleged sexual misconduct.

Boyd did indeed go to Tyson’s house the next day, but rather than address Tyson’s well-being, Boyd allegedly engaged in disturbing conduct that left her traumatized and afraid.

The next morning, Deputy Boyd showed up alone at Tyson’s home in a plain car and wearing a shirt identifying himself as a “Sheriff.” He was not visibly carrying a weapon. Tyson offered a handshake but, instead, Deputy Boyd hugged her. Deputy Boyd asked if there was a place that they could talk. She led him to chairs and a table on the side porch of the house. Before sitting down, Deputy Boyd asked if she had security cameras or neighbors, and he began to search the exterior of the home. Tyson said that she did not have cameras and her neighbors were usually not home. He commented that Tyson “must be lonely with [her] husband being gone” and “living . . . by [herself] the majority of the time at a dead-end road.” Tyson said that she wasn’t lonely, she was fine. She testified that she thought the officer’s behavior was strange, but she gave him the benefit of the doubt because he was helping her.

Deputy Boyd stayed for approximately two hours, during which time he made numerous inappropriate sexual statements and commands, which the district court found were neither invited nor consensual. For example, Deputy Boyd told Tyson that he and fellow officers had recently seen her at a restaurant, and he repeated sexual comments that the officers made about her body. For example, he said that the officers talked about “what they would like to do to [her] if they could.” He also compared the size of Tyson’s breasts with his wife’s breasts. He pressed her to answer invasive questions about her sex life, such as whether she and her husband would consider a threesome and whether her husband would allow someone to watch them having sex. And he asked for nude pictures of her husband.

Tyson alleges that Deputy Boyd then sexually assaulted her on the porch of her home. He commanded her to expose her breasts and her vagina, and spread her labia to expose her clitoris. After a prolonged hesitation, Tyson complied. Deputy Boyd then masturbated to ejaculation in front of her. She closed her eyes and waited for him to finish, at which point he left.

Tyson said that immediately afterwards, she “felt distressed and cried.”

Boyd continued to contact her, texting her messages such as “I saw you today” or “I haven’t heard from you,” but she didn’t respond. She told a friend she was worried about him hurting her.

“She began frequently seeing a psychotherapist and a hypnotherapist, her intimacy with her husband significantly decreased, she gained thirty pounds, she started carrying a gun, she put cameras up, and she generally stopped leaving her home,” the Fifth Circuit said in the ruling. “In short, the incident ‘changed [her] whole life,’ and she isn’t ‘who [she] used to be.””

According to Tyson, she “felt forced to submit to Deputy Boyd’s sexual misconduct because she was isolated and alone, as Deputy Boyd had pointed out; she felt intimidated by his authority; and she was frightened that the sexual harassment would escalate if she did not comply.”

“Certainty [sic], Deputy Boyd’s conduct toward Tyson was inappropriate and uninvited,” Truncale wrote. “But after careful consideration of the case law, Deputy Boyd’s conduct does not shock the conscience for purposes of the Fourteenth Amendment. As such, Tyson’s substantive due process claim fails as a matter of law and cannot support her Section 1983 claim.”

On Thursday, three judges on the Fifth Circuit reversed that decision in part, sending it back to Truncale’s court for further analysis.

In an opinion penned by U.S. Circuit Judge Edith Brown Clement, a George H.W. Bush appointee, and joined by U.S. Circuit Judges Gregg Jeffrey Costa and James Earl Graves, Jr., both Barack Obama appointees, the judges didn’t overturn Truncale’s ruling completely. They agreed that Tyson hadn’t shown that there had been a “seizure” such that her Fourth Amendment rights against unreasonable search and seizure had been violated.

They had a different take, however, when it came to Tyson’s 14th Amendment Due Process rights.

“It is beyond dispute that no legitimate state interest can justify an officer’s use of coercion to compel the subject of a welfare check to expose her most private body parts for his sexual enjoyment,” the ruling says. “Nor does Deputy Boyd argue that any legitimate state interest could justify his instructions to Tyson to perform nonconsensual sexual acts while he masturbated.”

The panel of judges said that Boyd’s alleged actions did, indeed, “shock the conscience,” despite Truncale’s finding otherwise, and therefore weren’t covered by a claim of qualified immunity.

“[T]his is not a case of recklessness, negligence, or overzealous policing,” the ruling said. “The record supports a premeditated intent to introduce sexual abuse into the welfare check because Deputy Boyd misrepresented to Tyson that he was on duty and searched the exterior of the home for cameras immediately upon arrival.”

“Deputy Boyd’s alleged conduct was an outrageous abuse of power that shocks the conscience and violated Tyson’s right to bodily integrity,” the judges later added.

In a footnote, the judges noted that criminal proceedings against Boyd “are ongoing.” He was indicted in 2019 on sexual assault, indecent exposure, and official oppression charges, the court said.

“We are proud that Justice was served today in the Fifth Circuit Court of Appeals,” attorney Jason Byrd said in an email. “We look forward to trial in the coming months and the opportunity to hold true wrongdoers responsible.”

Representatives for Boyd did not immediately respond to Law&Crime’s request for comment.

Read the Fifth Circuit’s ruling, below.