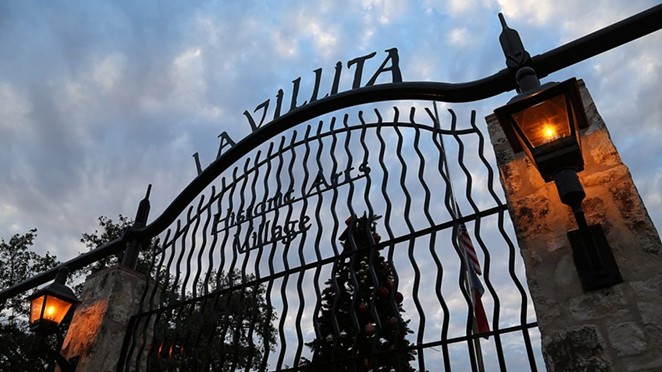 After announcing its upcoming Fall Heritage Festival, an event meant to soften the fundraising blow suffered from Fiesta’s cancellation, the Conservation Society of San Antonio is taking criticism from local business owners concerned the group is hosting a “superspreader” event during the pandemic.

Recently, as Covid-19 case numbers have plateaued and restrictions slowly eased, the Conservation Society received approval from the city and Mayor Ron Nirenberg to hold its Fall Heritage Festival, a one-night fundraiser November 6 at La Villita for a limited crowd of 1,000 people.

The festival is meant to mimic A Night in Old San Antonio, or NIOSA, but on a much smaller scale. Every Fiesta, NIOSA serves as the society’s primary fundraiser, hauling in roughly $1.5 million, most of which benefits historic preservation in San Antonio. La Villita alone receives more than $100,000.

When Fiesta 2020 was postponed from April to November, and then canceled because of the coronavirus, NIOSA was moved to April 2021 to adhere to the City of San Antonio’s restrictions on large gatherings.

“It’s not just a fundraiser—it’s a celebration of heritage,” said Patti Zaointz, the society’s president. “We’ve been under this pandemic cloud for so long—it’s an opportunity to come out and have a good time.”

According to Zaointz, the $125 festival tickets are all-inclusive, meaning guests can visit any food and beverage booth spread throughout La Villita without exchanging coupons or other forms of payment. Unlike at NIOSA, guests must sit down while eating, which is the only time they will be allowed to take their masks off.

After the festival was announced, the La Villita Tenants Association issued an open letter October 14 to Nirenberg, the City Council, and the city’s Center City Development and Operations department in opposition to the event. With input from members of the association, the letter was written by Deborah Sibley, the association’s treasurer and immediate past president.

In an interview, Sibley said the event’s announcement came as a surprise to members of the association.

“We weren’t informed by the city, which is unfortunate,” Sibley said. “Being a stakeholder, it would have been nice to be consulted about the potential plans, and for us to be able to contribute our position as they gave consideration to what they wanted to do.”

The festival also received criticism from some local bar and restaurant owners as first reported in the San Antonio Current.

“This news of a very expensive fundraiser comes just four days after our mayor went on TV pleading for restaurant, bar owners, event venues and PATRONS to ‘carefully consider the risk among the pandemic’ in regards to reopening any further,” Braunda Smith, owner of Lucy Cooper’s Icehouse, said in a Facebook post.

Smith was joined by other restaurant owners who took to social media echoing her sentiment. In a Facebook post, Tim McDiarmid, owner of The Good Kind, Ivy Hall and Tim the Girl catering, pleaded with Nirenberg for the city to support the local restaurant industry.

“We have been forced to shut down, some of us for months, with no city aid and CONSTANT blame and criticism,” McDiarmid said.

As local coronavirus case numbers began to decline, Zaointz said the society submitted a festival proposal to the city, which approved the plan.

“We submitted (the festival proposal) with the expectation that if it went, great; if it didn’t, it’s OK,” Zaointz said. “We placed it in the hands of the city and as things settled down, they thought this might be something that’s doable.”

In a statement, Nirenberg said:

“Every event must have an operational plan approved by Metro Health and the city manager, and finally by the Mayor. The operational plan will be reviewed and modified if necessary by the public health authorities. Public health guidelines will be strictly enforced and approval can be revoked if public health conditions change or it is otherwise determined to be necessary.”

After receiving approval, Zaointz said the society worked closely with the city to meet public health standards and COVID-19 safety protocols. For example, during the festival, guests will have access to hand sanitizing stations, be required to wear masks, and social distancing will be encouraged throughout the 4-acre venue; society volunteers will walk the event to make sure attendees adhere to protocols. Currently, there are no plans to require temperature checks before entering the festival, but Zaiontz said the society will continue to explore all safety options available.

The festival is not the first event to draw a potentially large crowd since quarantine started, Zaointz pointed out. In September, the first large convention was held at the Henry B. Gonzalez Convention Center, Six Flags Fiesta Texas reopened June 19, and museums are now open to the public.

The La Villita tenants letter expresses concern that bringing a crowd of 1,000 people to the village “has all the components of a potential “superspreader” of COVID-19. An October 12 quote by Nirenberg, which said “the virus is still active in our community and is transmitting person to person,” was also included in the letter.

According to Sibley, if an outbreak did occur, publicity for the businesses in La Villita would be negatively affected.

The festival will take place 6-9 p.m. on a Friday, which is after operating hours for the businesses. But Sibley said the event will disrupt their shops regardless.

“They plan to host this event on a Friday, staging on Thursday and tearing down on Saturday,” Sibley said. “That takes up three of the four days we’re open for business. We know from other events and even from NIOSA how we are affected and how tourists are deterred from coming in while these things are ongoing. So, we have a financial stake in this event.”

La Villita is owned by the City of San Antonio and managed by Center City Development and Operations (CCDO). To host the festival, the society had to book the village venue through CCDO, which declined an interview and did not provide any additional information.

As property owners in La Villita, the Conservation Society is a member of the La Villita Tenants Association. According to Zaointz, the event is meant to highlight the unique location. She also noted the society’s support of La Villita, including providing funding for the maintenance of the buildings with NIOSA proceeds, which annually exceed $100,000.

The society is also partnering with the San Antonio Food Bank and will have donation drop-offs at each festival entrance.

NIOSA originally began as the “Indian festival” held at Mission San Jose in the 1930s. It became an official event in the late 1940s, and eventually moved to La Villita. Since then, it has grown to a four-night event drawing more than 85,000 locals and tourists.

The San Antonio Heron is a nonprofit news organization dedicated to informing its readers about the changes to downtown and the surrounding communities.

Stay on top of San Antonio news and views. Sign up for our Weekly Headlines Newsletter.