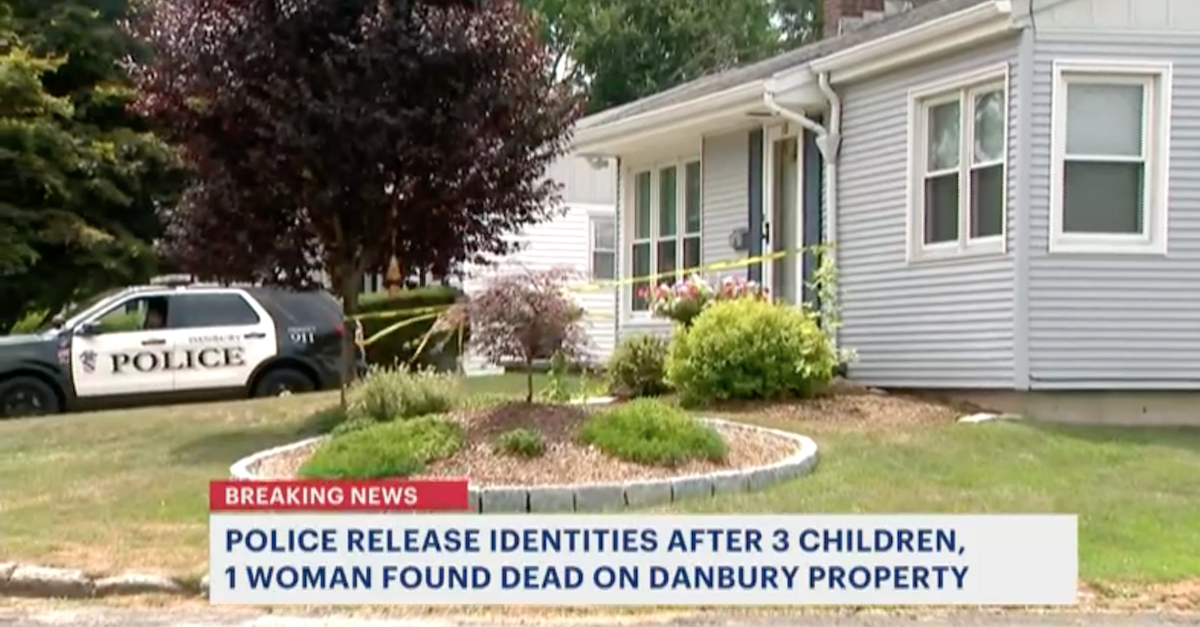 Authorities say a mother killed her three children in this Connecticut home and then killed herself in a backyard shed.

A Connecticut mother killed her three children and then hanged herself on Wednesday, according to the Danbury Police Department.

“Ms. Loja is the mother of the three children, and they all resided [in a house on] Whaley Street” in Danbury, Williams continued. “The children all appear to have died by strangulation, and the mother’s suspected cause of death is asphyxia by hanging.”

Danbury is in western Connecticut near the New York State border.

An official autopsy is pending, Williams noted in the Facebook post, but his department’s “preliminary findings indicate that Ms. Loja strangled her three children before killing herself.”  Williams cautioned, however, that the investigation remained ongoing.

Two other adults who lived in the residence in question were not present when the police arrived, the Facebook post added.

Hartford CBS affiliate WFSB reported that the incident was reported at 6:15 on Wednesday.  Police Chief Patrick Ridenhour told the television station that the three dead children were found inside a home at the aforementioned address and that their mother was found in a shed in the backyard.

The original 911 call was made by a “distraught” and “crying” male, Ridenhour told WFSB.

DANBURY INVESTIGATION: The home on Whaley St where 3 children were found dead last night remains taped off this morning. Police say a woman was also found dead inside a shed in the backyard. LIVE with updates from the scene on @News12CT pic.twitter.com/9sdcx0EU2z

Danbury Public Schools Superintendent Kevin Walston confirmed that “two of the three children named in the incident” were students in his district.

“Our thoughts are with everyone in the Danbury community impacted by this tragedy and we are grieving with you,” Walston said in a statement obtained by News12. “Losing children to violence is becoming far too common in our nation and events such as these shine a light on the challenges communities face, specifically around mental health, that leave so many people vulnerable.”

POLICE: Sonia Loja, 36, Junior Panjon, 12, Joselyn Panjon, 10, and Jonael Panjon, 5 all found dead at 10 Whaley St., Danbury. Ms. Loja was the mom of the kids. Kids appear to have died by strangulation, Mom’s suspected cause of death is asphyxia by hanging in the shed @FOX61News pic.twitter.com/wlG2dyd4pF

A series of city agencies, including the mayor’s office, the police department, the fire department, the health department, education authorities, emergency management authorities, and Nuvance Health, a local hospital, are assisting with friends and relatives of the deceased, the police said.  “As this is also an emotionally damaging incident for first responders, services have been extended to public safety personnel who responded to the scene,” the police added.

“Our thoughts and prayers go out to the family and friends of the victims,” the police Facebook post concluded.

A truly horrible event occurred in our city yesterday and we mourn the tragic loss of life. In the coming days, mental health and counseling services will be provided through collaboration with the Danbury Public Schools and the City of Danbury. Our community grieves for the innocent lives taken from us. We will get through this together.

“The kids were really good kids,” Baugher told the ABC affiliate. “They were really friendly kids.”

“When you drive by, they would wave and say, ‘How are you doing?”” he continued. “Wave back to them, ‘Hi, how are you doing?’ They were always happy kids. Always playing in the yard, having fun, laughing all the time.”

WFSB said the police were not searching for any other suspects.  The police chief told that television station Wednesday night that the public was not in danger.